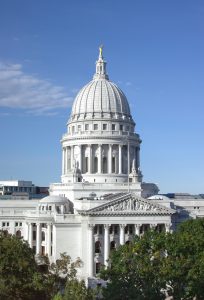 While the halls of the State Capitol are relatively quiet this time of year, that is about to change very quickly, as the 2023-24 legislative session kicks-off on Jan. 3. But Inauguration Day will just be the start of a two-year session that will see WEDA actively engage policymakers on legislative and regulatory issues to help create a strong economic development environment in Wisconsin and to ensure WEDA members have access to the necessary program and policy tools to grow their local economies.

In fact, WEDA has developed our 2023-24 Legislative Agenda, which lays out our legislative priorities for the upcoming session and will be used to guide our advocacy efforts over the next two years. Thank you to the WEDA Legislative Committee, which was instrumental in the development our Legislative Agenda.

Republican legislative leaders in both the Wisconsin Assembly and Senate recently announced standing committee assignments for the 2023-24 legislative session. Please find below the GOP make-up of committees of interest to WEDA:

It is also important to point out that appointments to the 16-member Joint Finance Committee (JFC) were also announced. The Republican-controlled committee, which is comprised of equal members from both the Assembly and Senate, is among the most important committees in the Legislature, as it is charged with writing the two-year state budget bill. Please find below the JFC roster for the 2023-24 legislative session:

As was announced in last month’s WAO Advocacy Newsletter, State Sen. Alberta Darling (R-River Hills) steeped down from office on Dec. 1 after serving in the Legislature for 32 years.

The 8th Senate District, which Darling vacated, covers portions of Waukesha, Ozaukee, and Washington Counties, including the municipalities of Mequon, Cedarburg, Germantown, and Menomonee Falls. The district leans Republican, but the special election could be competitive, and several candidates – from both sides of the aisle – have announced they will seek the open seat next year.

On the Democratic side, Whitefish Bay attorney Jodi Habush Sinykin is the only announced candidate.

Gov. Tony Evers has ordered a special election for April 2023, which coincides with the state’s 2023 spring election. If necessary – which currently appears to be the case on the GOP side – a primary will be held on February 21. The winner of the special election will serve the remainder of Darling’s term, which ends in January 2025.