In the closing, frenzied last days of the legislative session, lawmakers sent hundreds of bills to Gov. Scott Walker. Over the last few weeks, the Governor has been busy shrinking the stack of legislation on his desk, signing them into law one by one. Among the bills recently signed by the Governor were a number of proposals supported by WEDA. 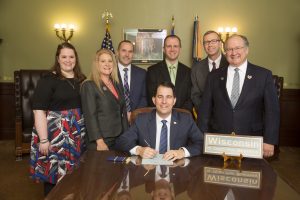 Earlier this week, Gov. Walker signed the TIF subtraction bill (AB 659) into law, giving communities greater flexibility in the use of tax incremental financing (TIF). The bill was considered priority legislation for WEDA.

State law allows a municipality to subtract territory from a tax incremental district (TID) prior to the termination of the whole TID. However, prior to the passage of AB 659, if a municipality subtracted a portion of territory from a TID, they were not eligible for a levy-limit adjustment – not at the time of the subtraction, nor at the time of the termination of the whole TID. It provided no incentive for a community to subtract territory from a TID, even if it was in the best interest of the district or local property taxpayers.

The new law fixes this oversight in state TIF law by permitting municipalities that subtract territory from a TID to increase their levy limit by an amount equal to 50% of the subtracted territory’s value increment. It’s straightforward, common-sense legislation that will incentivize municipalities to use the TID territory subtraction process, potentially resulting in additional local tax revenue, immediate property tax relief, and new economic development opportunities.

The Governor also recently signed AB 547, the wetlands regulatory reform bill. The legislation streamlines the regulation of certain isolated, non-federal wetlands and exempts artificial wetlands from state permitting and mitigation requirements. The new law strikes a balance between conservation and economic development by making reasonable improvements to the state’s wetland regulatory process, which has been a costly obstacle to development and business expansion.

Please find below an overview of other WEDA-supported bills recently signed into law by the Governor:

For greater insight into WEDA’s legislative efforts during the 2017-18 session and the end results, please feel free to review the WEDA Bill Tracker and Legislative Scorecard. 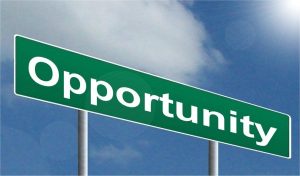 The Opportunity Zones Program created by the federal Tax Cuts and Jobs Act of 2017 is designed to drive long-term investment to low-income communities by providing investors with certain tax incentives when they re-invest unrealized capital gains in designated Opportunity Zones. The State Legislature recently passed legislation to incorporate the federal tax break in Wisconsin law.

The federal tax break provided by the program will also be enjoyed by Wisconsin taxpayers. Before the Legislature adjourned for the year, lawmakers amended and passed non-related tax legislation (AB 259) to adopt most of the provisions contained in the Tax Cuts and Jobs Act that were relevant for state incomes tax purposes, including the Opportunity Zone provisions.

According to the non-partisan Legislative Fiscal Bureau, the measure will reduce state income tax collections by an $10 million in 2018-19 and $6.6 million the year after.

For more information on the Opportunity Zones program, click here to read an overview of program details provided by Enterprise Community Partners, Inc.

One of the last actions of the Legislature this session was approval of a bill ( SB 798 ) to create a one-time child tax rebate, which will give Wisconsin parents a sales tax refund of $100 per child. In addition to the child tax refund, the bill was amended to include a one-weekend “back-to-school” sales tax holiday for certain items, including clothing and school supplies.

The bill sets the sales tax holiday for the weekend of August 4 and 5, 2018. Shoppers will NOT pay sales taxes of following items during the tax holiday weekend:

The following items will NOT be sales tax exempt (meaning they will remain taxable) during the sales tax holiday weekend: Sports or recreational equipment; protective equipment; clothing accessories, such as jewelry or watches; school art supplies, and school instructional materials, such as textbooks.

Governor Walker has yet to sign the legislation into law, but is expected to do so in the near future.

As was reported in the March edition of the WEDA Wire , the state has unveiled a new website to offer information to Wisconsin companies seeking to provide goods and services during the construction phase of the $10 billion Foxconn campus in Racine County.

In addition to the new site designed to help businesses learn more about becoming a subcontractor, supplier, vendor, or professional services provider during the construction phase, the Wisconsin Economic Development Corporation along with the project’s construction manager is hosting informational meetings across the state to help construction-related companies better understand the bidding process on the first phase of construction.

WEDA has created a new legislative awards program to recognize state lawmakers who stand up for policies that drive economic growth and who are aligned with WEDA’s mission of promoting economic development to make Wisconsin a better place to live and work. Beginning in 2018, the WEDA Champion of Economic Development Awa r ds will be given out every two years following the end of each legislative session.

The selection process for the Champion of Economic Development Award is based on several factors, including a legislator’s voting record on key economic development legislation, bills he or she authored and co-sponsored, and their responsiveness to issues critical to economic growth. The selection process does not take into account partisan affiliation.

The list of award recipients will be approved by the WEDA Legislative Committee within the next few weeks and posted on the WEDA website. Whenever possible, awards will be presented to legislators in their home districts with the participation of WEDA staff and local WEDA members.

If you have any questions or would like more information about the awards program, please contact the WEDA office at weda@weda.org.