Legislation to streamline the regulation of state wetlands recently won approval from the Legislature and was sent to Gov. Scott Walker for his signature. The bill (AB 547) would reform the state wetland permitting process and exempt man-made wetlands from mitigation requirements.

The legislation was introduced by Sen. Roger Roth (R-Appleton) and Rep. Jim Steineke (R-Kaukana) to help modernize the current regulatory process that has proved to be a costly obstacle to development and business expansion.

The version of the bill lawmakers ultimately passed was not as wide-ranging as the original proposal, which would have eliminated the permitting process for all isolated, non-federal wetlands. The bill was amended after a compromise was reached with conservation and outdoor sporting organizations. The bill as amended and approved by the Legislature will do the following:

For more detailed information of the wetland regulatory reform bill, please review the WI Legislative Council memo on the amended version of the bill approved by lawmakers.

The bill, which increases the per project cap on HTC awards from $500,000 to $3.5 million, effectively “fixes” the governor’s partial budget veto that set the HTC per project cap at $500,000 beginning in July 2018. The governor is expected to sign the legislation raising the cap.

WEDA also actively engaged in advocacy efforts to preserve the federal HTC program, which was in jeopardy of being eliminated as part of the federal 2017 Tax Cuts and Jobs Act. Fortunately, the federal HTC was saved, but Congress made the following changes to the program in the tax reform bill:

In his February State of the State Address, Gov. Scott Walker proposed the creation of the Rural Economic Development Fund to boost the state’s investment in rural Wisconsin and provide new economic development opportunities for rural communities.

The governor realizes Wisconsin must take a new approach to rural economic development. While more populated areas of the state are thriving, the economic performance of rural Wisconsin is lagging. Lawmakers also understand the importance of boosting the rural economy.

Last month, the Assembly unanimously passed legislation (AB 912) to establish the fund. The bill would invest $1 billion over the next twenty years in programs administered by WEDC to promote business growth, attract private investment, and strengthen the rural workforce. It would also provide funding directly to local economic develop organizations for the following purposes:

However, the Senate has yet to consider the legislation. They are is scheduled to meet once more this year (March 20), but there is no guarantee they will take-up and pass the bill. The significant cost of the program — $50 million a year for twenty years – has been an issue of concern for some senators and could ultimately derail passage of the bill.

WEDA has been extremely busy in the State Capitol advocating for the bill, and we have asked WEDA members to contact their senators to encourage them to support the legislation. We have also been working with other key stakeholders, including NAIOP-Wisconsin and the Wisconsin Paper Council, to help advance the bill through the legislative process. Click here to read WEDA’s coalition memo to the Senate on AB 912.

If you haven’t already, please call or-e-mail your senator and urge him or her to support the Rural Economic Development Fund bill. If you need assistance engaging your senator, please contact the WEDA office at weda@weda.org.

According to the latest Marquette University Law School poll, Wisconsin voters are skeptical of the state’s investment to bring Foxconn to Wisconsin. The survey of 800 registered voters conducted in late February found 49 percent of voters do not think the Foxconn plant will be worth the investment by taxpayers, while 38 percent think the investment will pay off.
Also, while 57 percent of those surveyed think the Foxconn project will substantially improve the economy of the greater Milwaukee area, only 25 percent of voters believe the plant will benefit businesses where they live.

In addition to Foxconn, the Marquette poll surveyed voters on several hot-button issues, including guns, education, and immigration. The poll also asked voters what they thought of the job performance of President Trump and Gov. Walker, as well as their opinion on candidates for statewide office in the 2018 election races. Please find below some of the key results:

The current legislative session is coming to a close and the flurry of legislative activity under the Capitol dome is beginning to wane. However, staying up-to-date on the latest legislative development remains a challenge, as nearly1,900 bills have been introduced over the past 14 months. Fortunately, WEDA members don’t need to weed though the stacks of bills to identify those that will impact economic development in Wisconsin.

Instead, you can simply visit the WEDA Bill Tracker to find information on and the status of economic development legislation that has been passed or is still being considered by the Legislature.

You can also view WEDA’s priority legislation grid for a quick update on the issues and bills that will have the biggest impact on WEDA members and economic development in Wisconsin. 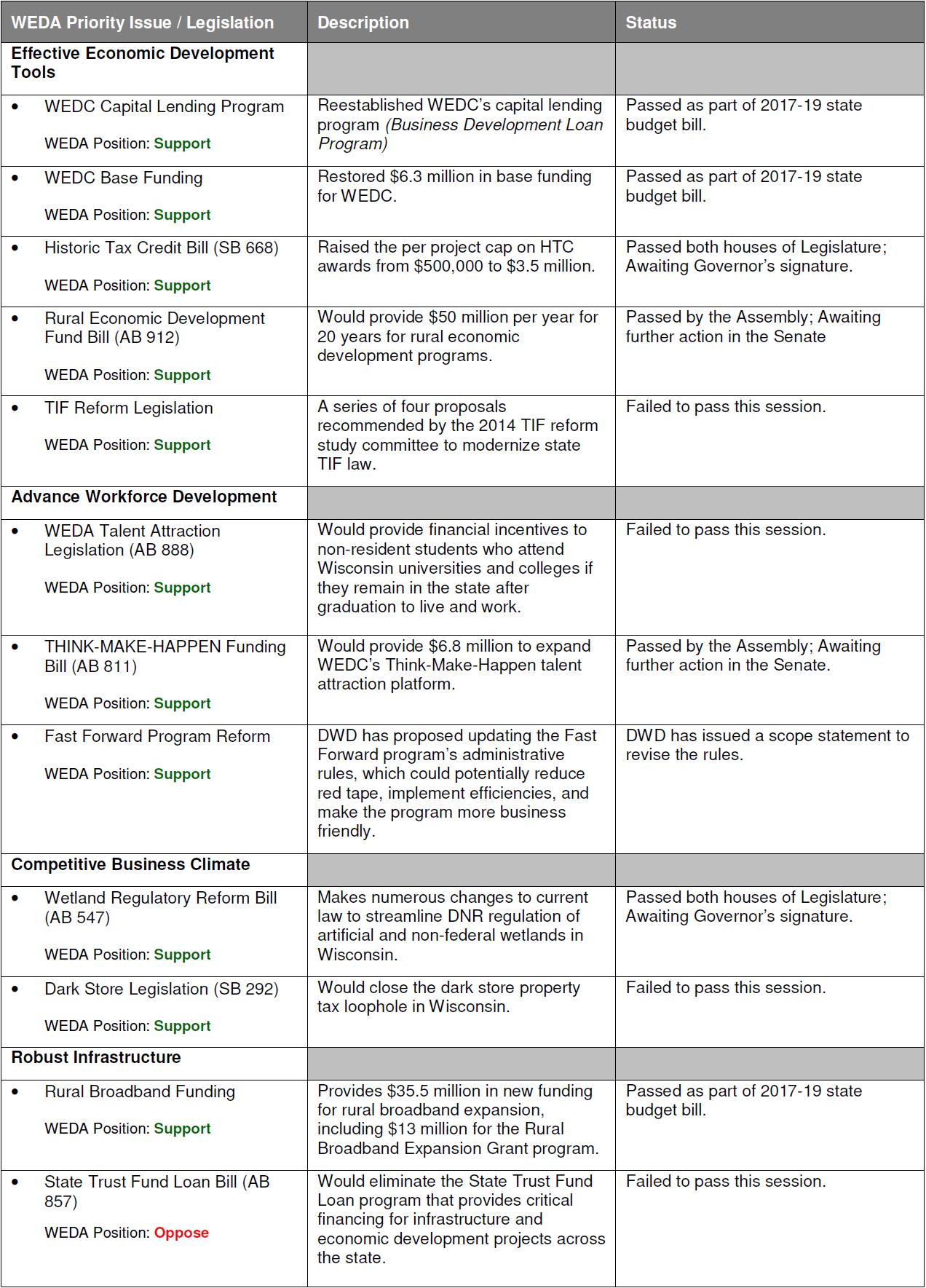