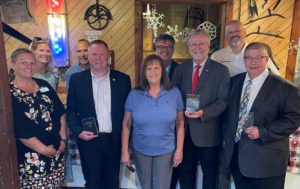 “Reps. Armstrong, Petryk, and Summerfield all exhibited outstanding leadership during the 2021-22 session to advance legislation critical to growing the state’s economy and to promoting prosperity for businesses and residents in the Chippewa Valley and across the state,” said Michael Welsh, WEDA V.P. of Legislative Affairs. “We greatly appreciate their commitment to working on key economic development issues, including rural broadband expansion, housing development, workforce retention and attraction, and community redevelopment.”

The “Champion of Economic Development” award is presented at the end of each legislative session to state lawmakers who demonstrate extraordinary support for important economic development policies. This year WEDA is presenting the award to 20 state lawmakers who exhibited an exceptional commitment to growing Wisconsin’s economy based on several factors, including voting record, sponsorship of legislation, and responsiveness to critical economic development issues.

Following the presentation of the legislative awards, WEDA partnered with CCEDC to host the first of its kind legislative speed-networking listening session with Chippewa Valley area legislators, including the three “Champion of Economic Development” award winners, as well as Sen. Kathy Bernier (R- Chippewa Falls) and Rep. Jesse James (R-Altoona).

“This unique event not only provided WEDA with a great opportunity to thank Chippewa Valley lawmakers for their legislative work, it also offered local business leaders a chance to interact with their legislators to discuss their biggest challenges as well as potential legislative solutions,” noted Donna Walker of Dairyland Power, WEDA’s Board Chair. “The legislators rotated to a new table every ten minutes to listen to feedback and concerns on a variety of topics impacting economic growth in their communities. It was a fun and engaging event that WEDA hopes to do more of throughout the state.” 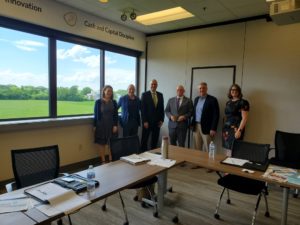 critical work on a wide range of legislation, from proposals to strengthen Wisconsin’s workforce to initiatives aimed at boosting the state’s housing stock and encouraging the redevelopment of blighted properties. The award was presented at a local Childcare and the Workforce Business Roundtable held at Amcor Flexibles in Oshkosh, WI. The event was organized by the Oshkosh Chamber of Commerce, Envision Greater Fond du Lac, and the Greater Oshkosh Economic Development Corporation.

Please find below the full list of state lawmakers who have been recognized as a WEDA 2022 “Champion of Economic Development”: