The current session of the Wisconsin Legislature has effectively come to an end. While lawmakers still need to wrap-up a few miscellaneous items, as far as economic development-related legislation is concerned, they have completed their work for the year.

WEDA began the 2017-18 legislative session with an aggressive legislative agenda that included numerous statewide policy proposals to advance economic prosperity in Wisconsin. WEDA ended the session with a number of successes, a handful of disappointments, and a few close calls.

One bill that didn’t quite make it over the goal line was the Rural Economic Development Bill (AB 912), which would have provided $1 billion over twenty years for rural economic development programs. Although the legislation was proposed by Gov. Scott Walker and passed unanimously out of the Assembly, the bill hit a roadblock in the Senate. Senators were concerned about the large price tag and the bill’s lack of specifics on how the funding would be spent to boost economic growth in rural Wisconsin.

Unfortunately, the concerns were enough to “kill” the bill this session. However, the economic development challenges faced by rural communities are real, and it’s likely the Legislature will address the issue next session.

The “dark store” bill (SB 292), which would have closed the dark store property tax loophole in Wisconsin to ensure tax fairness and continued TIF viability, is another bill that failed to pass, but will almost certainly be revisited when the Legislature reconvenes in 2019.

But as mentioned above, there was plenty of good news for economic development and WEDA coming out of the 2017-18 legislative session, from long-overdue wetland regulatory reform (AB 547) and preservation of the state historic tax credit program (SB 668), to reestablishment of WEDC’s capital lending program (AB 64 / state budget bill), which has been reimagined as the Business Development Loan Program.

In the coming weeks, WEDA will be publishing a detailed 2017-18 Legislative Update to provide members with in-depth information on the legislative session and how recently passed legislation with impact economic development in Wisconsin. In the meantime, please feel free to visit the WEDA Bill Tracker and review our Legislative Scorecard for greater insight into WEDA’s legislative efforts this session. 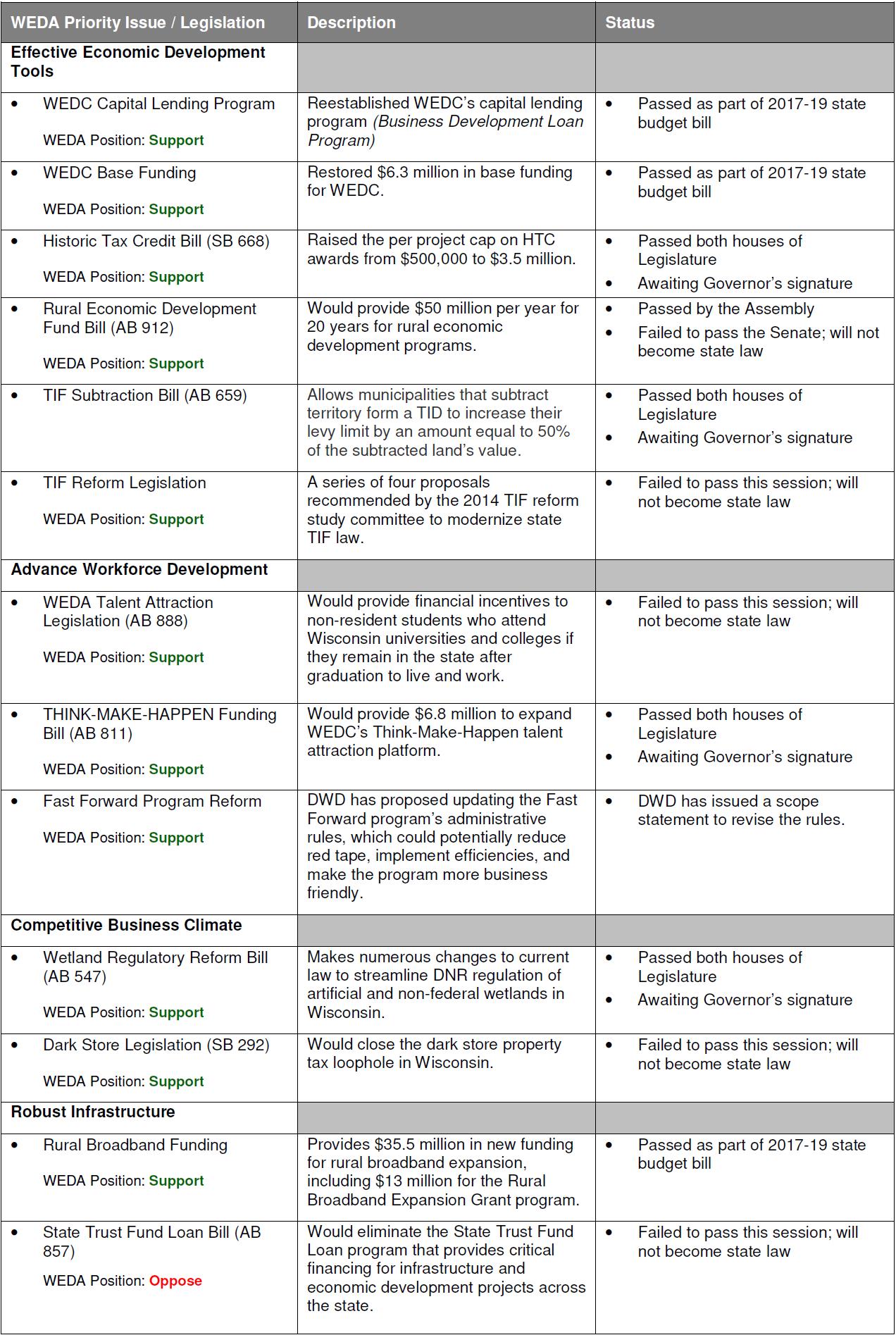