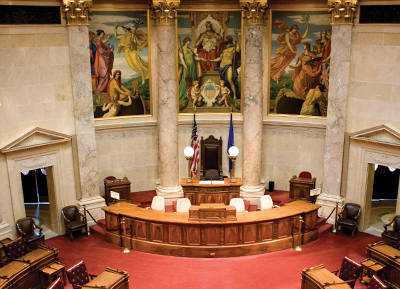 Under current law, Wisconsin communities can use an ERTID to fund the clean-up of contaminated sites. More specifically, ERTIDs can cover capital costs, as well as financing and professional services costs associated with the investigation and removal of pollution from the environment, including the ground and water in the TID. However, communities cannot use an ERTID to address environmental pollution within existing structures, as current statute excludes the demolition or redevelopment of contaminated buildings as an eligible ERTID project cost.

Older buildings are often contaminated with hazardous materials, such as asbestos, lead, and other heavy metals. These contaminants can create a significant barrier to the redevelopment of these older structures due to the increased challenges and costs of environmental clean-up. As a result, these sites can remain vacant for decades, contributing to blight and diminished property values in communities across the state.

Senate Bill 518 would address this issue by making a slight modification to current TIF law that would tweak the definition of “environmental pollution” to include harmful substances found inside of existing structures. This would qualify the redevelopment of these buildings as an eligible ERTID project cost. While the change is small, the economic development impact of the bill would be substantial, providing communities with a narrow, yet effective tool to encourage the redevelopment of contaminated structures and create new economic opportunities. Current Wisconsin TIF law and project financing practices simply do not provide this opportunity.

It is also important to point out that SB 518 would help promote the development of much-needed workforce housing across the state. A growing trend in Wisconsin and across the country is the conversion of aging, vacant buildings, such as schools, churches, and even medical clinics, into affordable workforce housing, giving these buildings a second shot at ­serving their communities. Under the bill, ERTIDs could be used to create additional housing options.

In addition to recent approval by the Senate, the legislation last week was unanimously passed by a key Assembly committee, and the WEDA Government Affairs Team is working with lawmakers to schedule the bill for a vote before the full Assembly. If passed by the Assembly, the legislation will be sent to Gov. Tony Evers’s desk for the opportunity to be signed into law.